I haven't been very productive but did get some binding done for Debra and finished a table topper for my daughter. It's machine pieced but I hand quilted it. 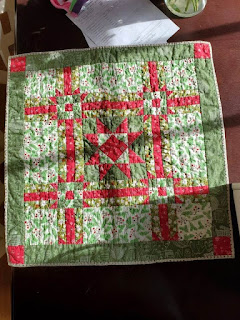 Yesterday I finished a dress my other daughter was working on while she was out with friends.

One of my goals today - I set a lot of them and hope one or two get accomplished - is to list some of my old patterns on Etsy, and to get a couple of outfits up on Poshmark, something I tried a while back but got discouraged. I hate letting go of my clothes but I'm not wearing them and no, they do not bring me joy. LOL.

Have any of you watched The Great British Sewing Bee? I stumbled on it on Youtube. Someone named "HappyCat" has uploaded many of the episodes. It's quite interesting, especially the segment where the contestants are given a garment (usually) to reconstruct. In one episode, they had to use all of the waste fabric from their other projects. It is a lot of fun and like me, you'll probably put yourself in their place. I truly felt the panic as they would be within 5 minutes of their time running out, and trying to put in a zipper (or "zip").

It has the exact same format as the Great British Bake-off.  And the prize? A bouquet of flowers and a trophy - no cash.  Just the honor of winning. And the contestants are so helpful to each other. I'm thinking of Project Runway where the rule seemed to be sabotage and back stabbing!

I hope your weather is nicer than it is here -gray, cold, and rainy. I am heading to the library to pick up Olive Again by Elizabeth Strout, which I have been waiting on for months - even though I am just getting into The World We Knew, Alice Hoffman's latest book.

Still, I woke up this morning, so it's a great day!

Edited: I was just looking back at some old posts and on December 31, 2009 I pondered, What will blogging look like in 10 years?  I don't think anyone anticipated the impact of social media. I commented to my daughter a few weeks ago that it looks like vlogging has outrun blogging. She and I have even discussed starting a YouTube channel. Stay tuned.....

What you see below is a laundry basket filled with scraps left over from years of quilting and sewing. I can't bring myself to tossing them. 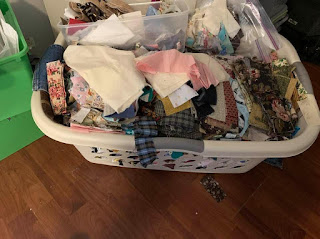 If they are big enough, I cut them into usable pieces, anywhere from 1" to 5", and into strips if there's enough fabric.  Eventually the really odd or small pieces get stitched into blocks like these below. Sometimes, even if the scrap is big enough, I'll go ahead and use it in one of these crumb blocks.  It really is a lot of fun to just let go and stitch without thinking too much. I have quite a few big blocks like this which I think would make a pretty nice quilt.  These are things I work on when I can't get into the mood to focus on anything else. 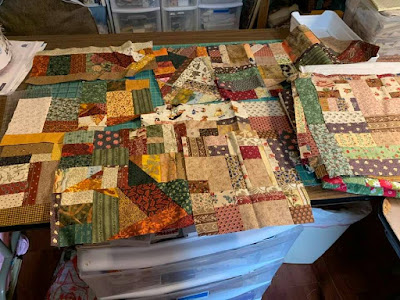 I could use your suggestions about how to put these sampler blocks together. That green block in the corner seem really out of place (and seems to be trying to escape) but my aunt made these and gave them to me so I want to do something with them. 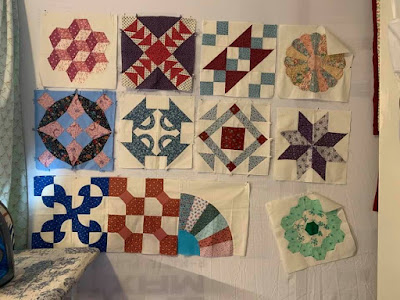 And by the way, Debra, I have some binding for you. 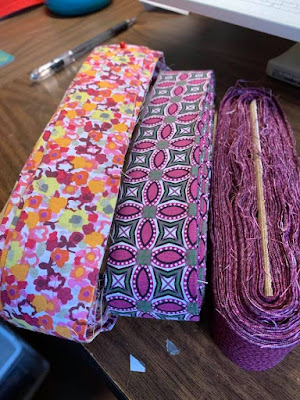 Last, enjoy the first color of early spring. Our weather has been so crazy - freezing and snowing one day; 70 degrees the nest. Poor little jonquils are confused. 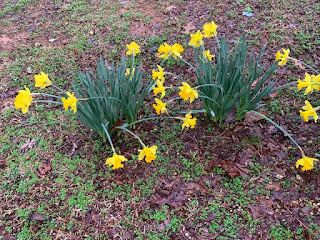 I have an appointment for a massage later today. I have a really sore muscle on the left side of my neck/shoulder. It's killing me right now as a matter of fact. I hope the massage will help.

Hope you are having a good day.

Where I've Been and Where I'm Going

Social Media can be the bane of one's existence. My advice is don't go there if you're not there already and if you are, run. It is a soul killing, blog killing, grammar disrespecting swamp. While it has its good points - such as finding inspiring DIY YouTube videos and reconnecting with old friends - it tends to be a huge time waster. So I've turned my back on Facebook, starting today, for the most part; I "unfriended" people I don't really know and "unfollowed" page after page that was clogging up my feed and taking up so much of my time. It's a deep, deep rabbit hole and once you fall down it, climbing out almost requires a twelve step program.

I retired in December 2018 and I thought I'd have 8-10 hours a day to do nothing but sew and quilt. Wrong! There's been a lot of activity in our lives so the dream of sitting at the sewing machine or doing handwork all day has almost evaporated but not quite.

This past fall I made several "junk journals" for gifts. The one below was for my daughter. She's a huge Jane Austen fan so that was the theme of her journal.

Making these journals is somewhat like making a crazy quilt. Lots of creative license and there's no stopping point. I had a great time collecting ephemera to add to them and I love the quirkiness of them. I purchased many of the pages you see from Etsy shops. 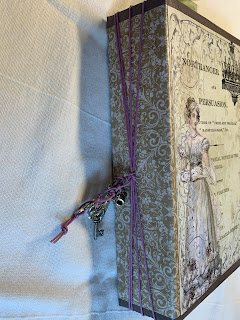 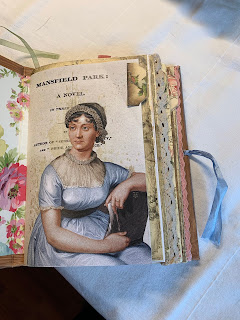 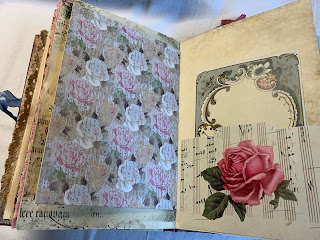 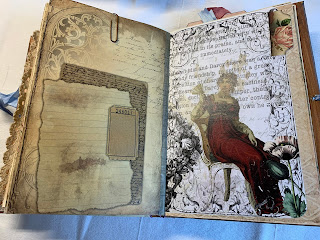 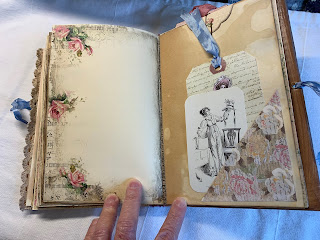 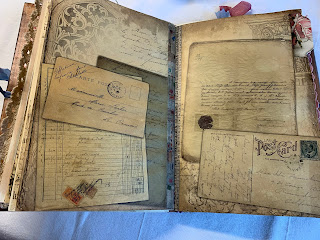 It's such an enjoyable process with all the beautiful papers and images available.

All for now. Hopefully  not such a long break between posts.

Only one way to drink coffee.
Posted by Deborah M. at 6:52 PM No comments:

I would love to spend my money and my time gardening. Unfortunately I do not have much of either, certainly not enough to do what I'd like to do.

A couple of weeks ago my daughter and I took a trip to Asheville to the Biltmore Estate which has a magnificent greenhouse.  Here's just a sampling of the gorgeous flowers & plants. 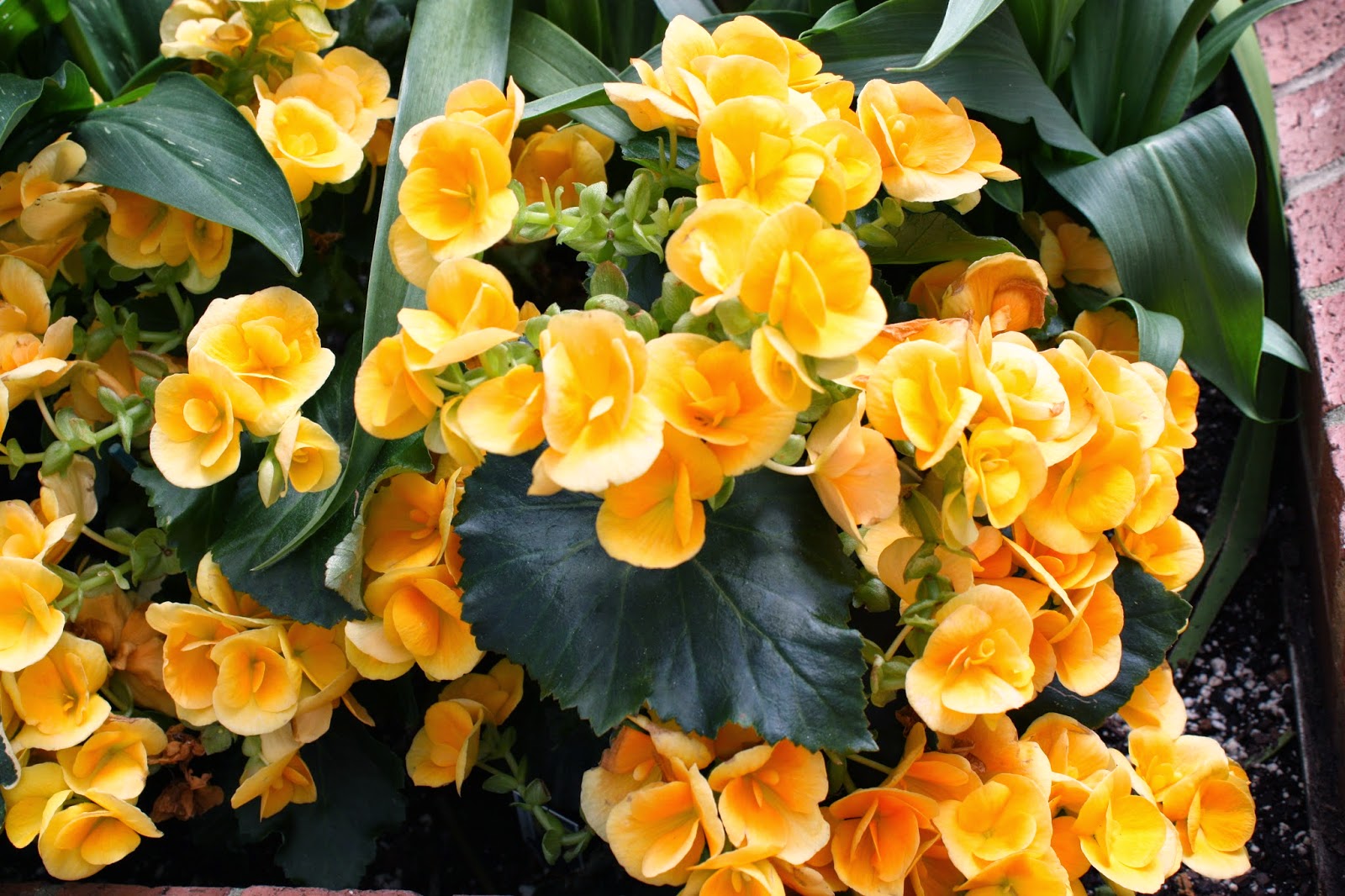 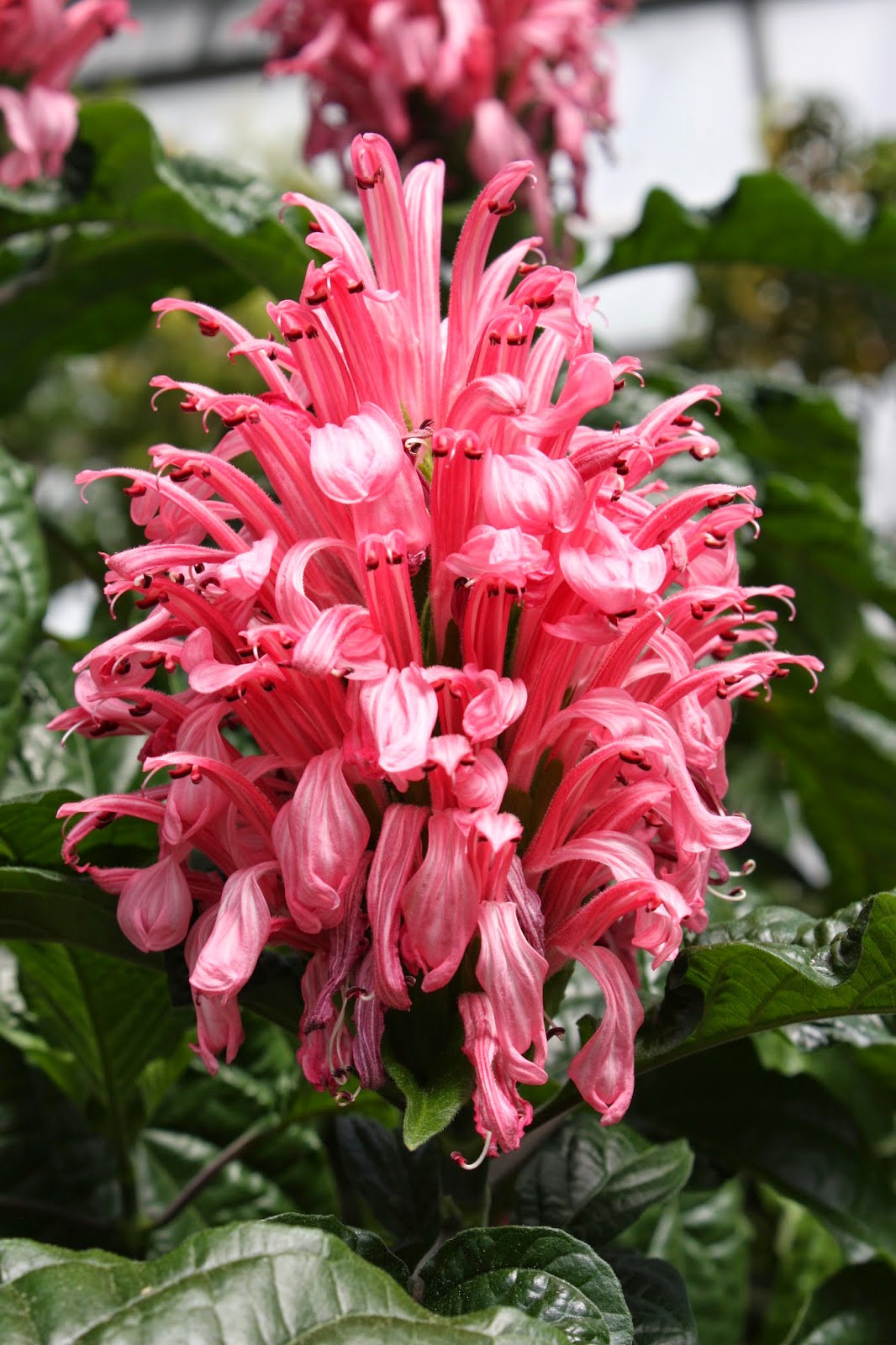 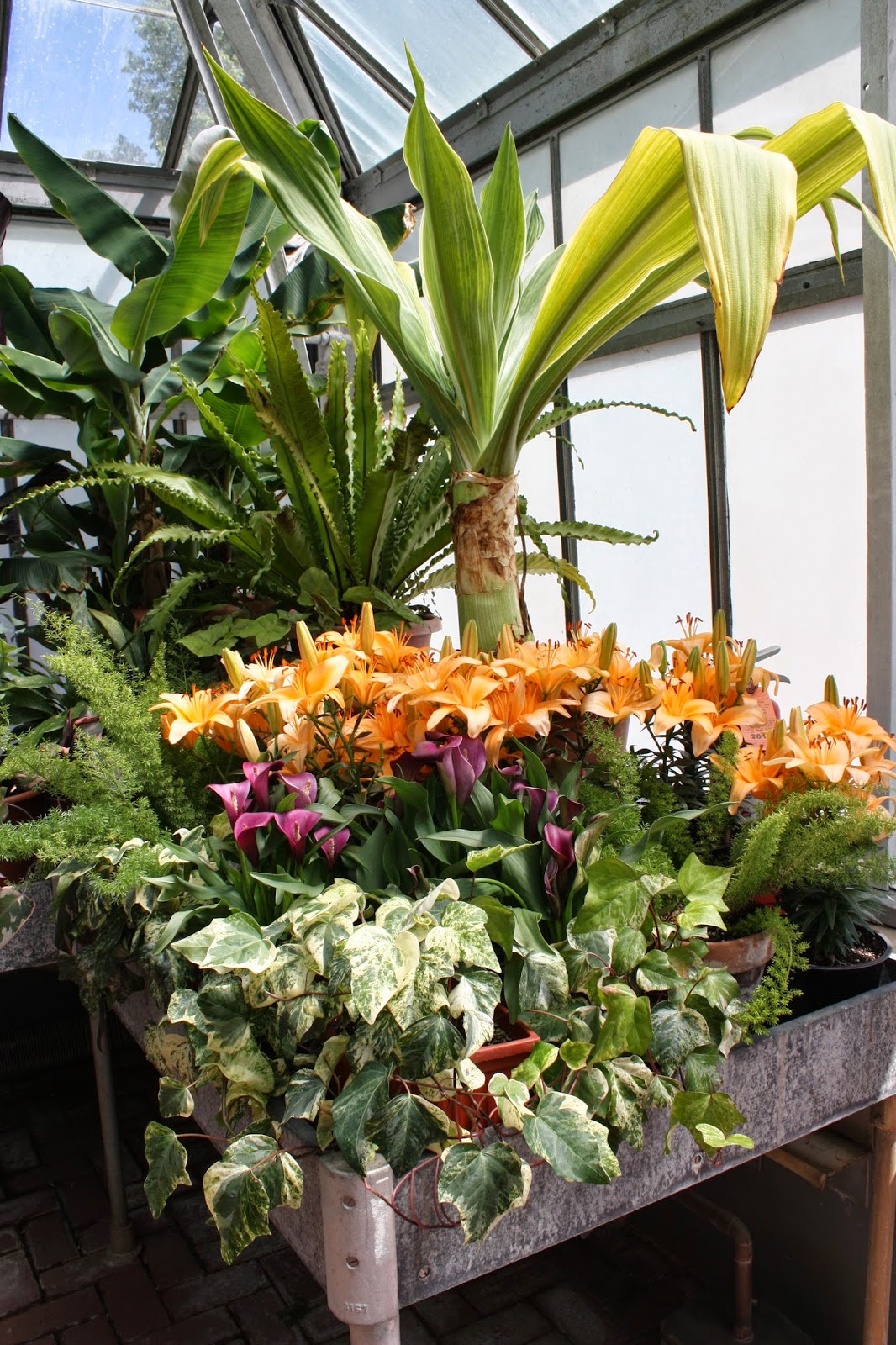 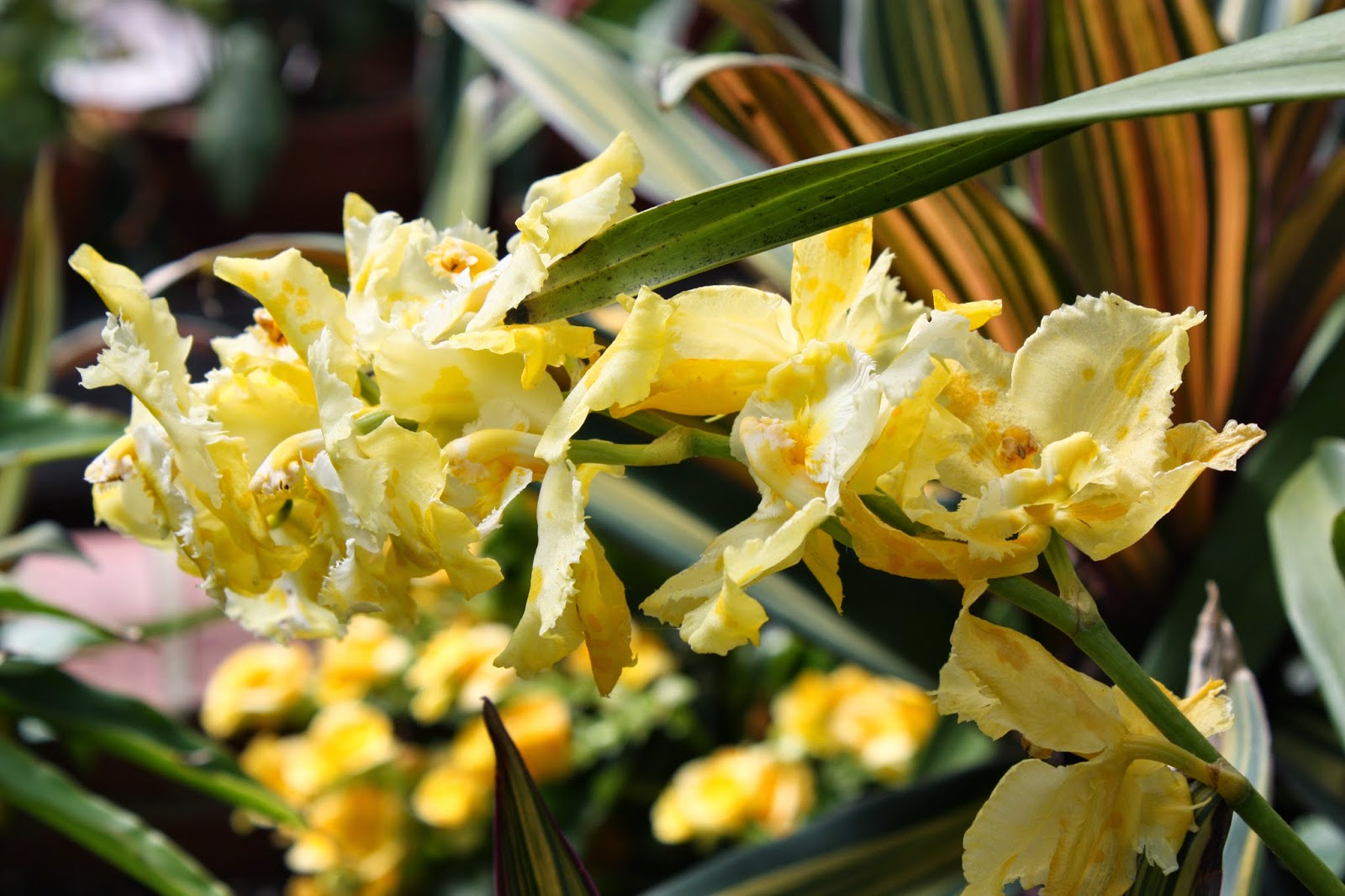 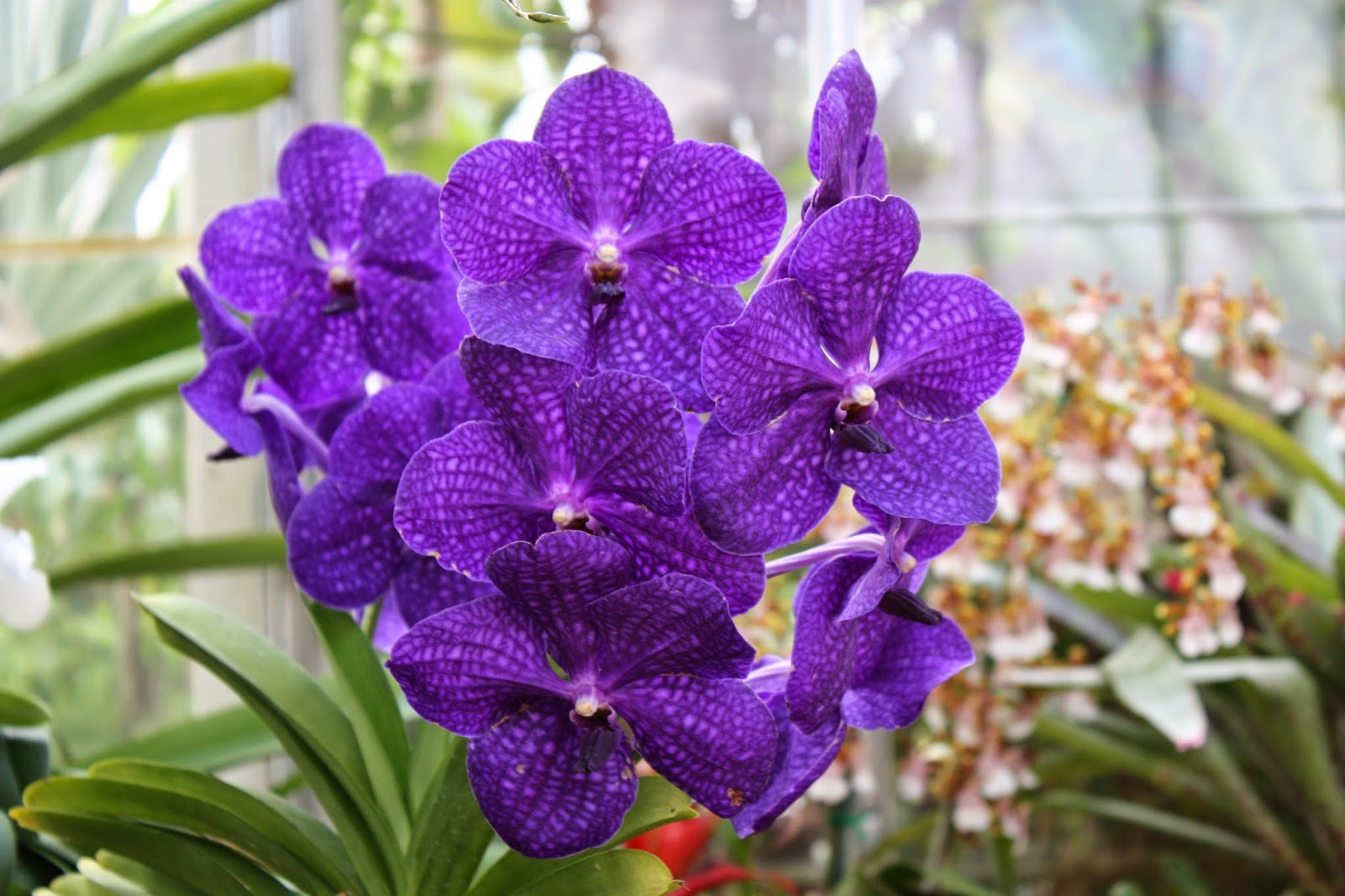 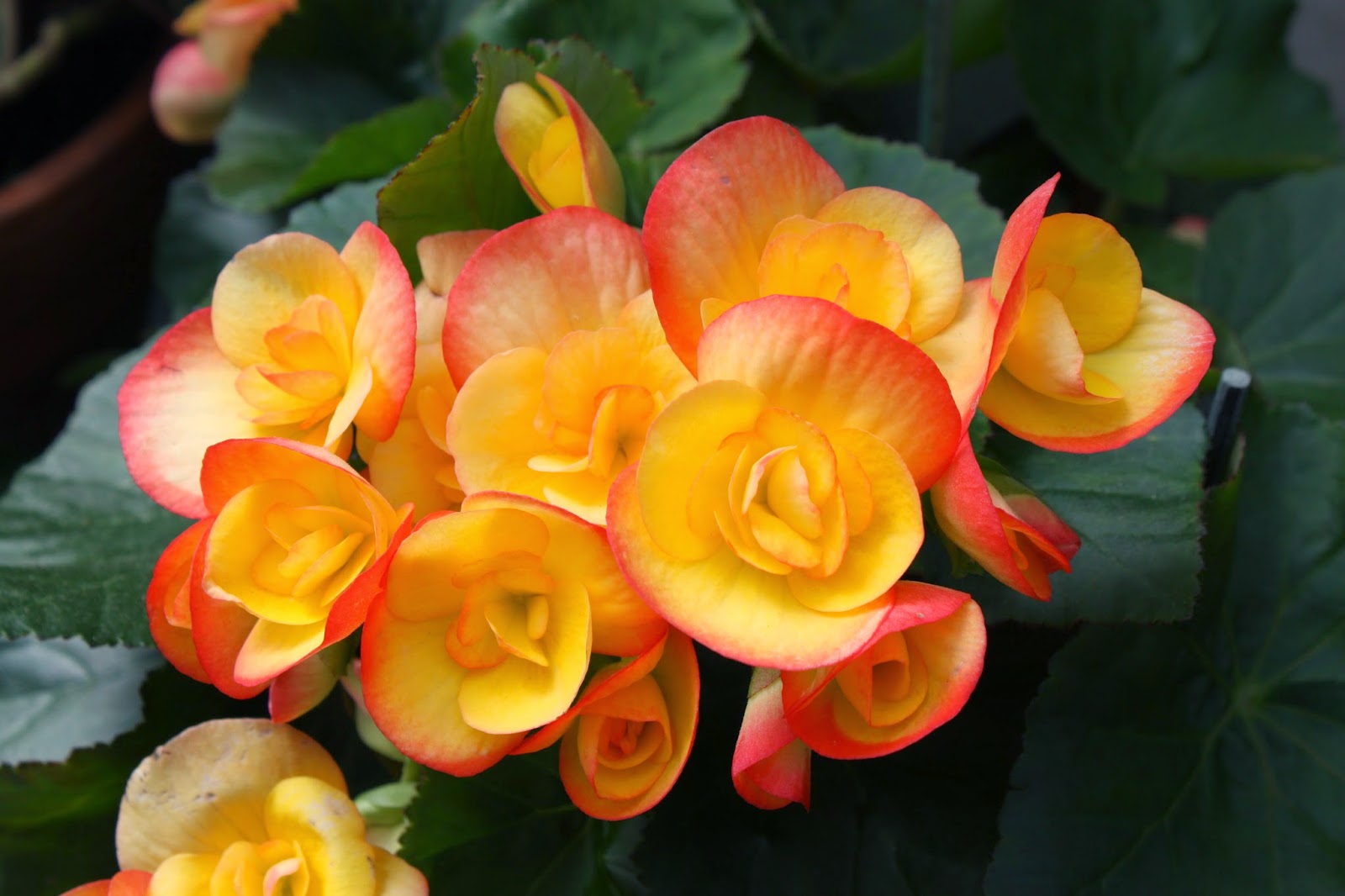 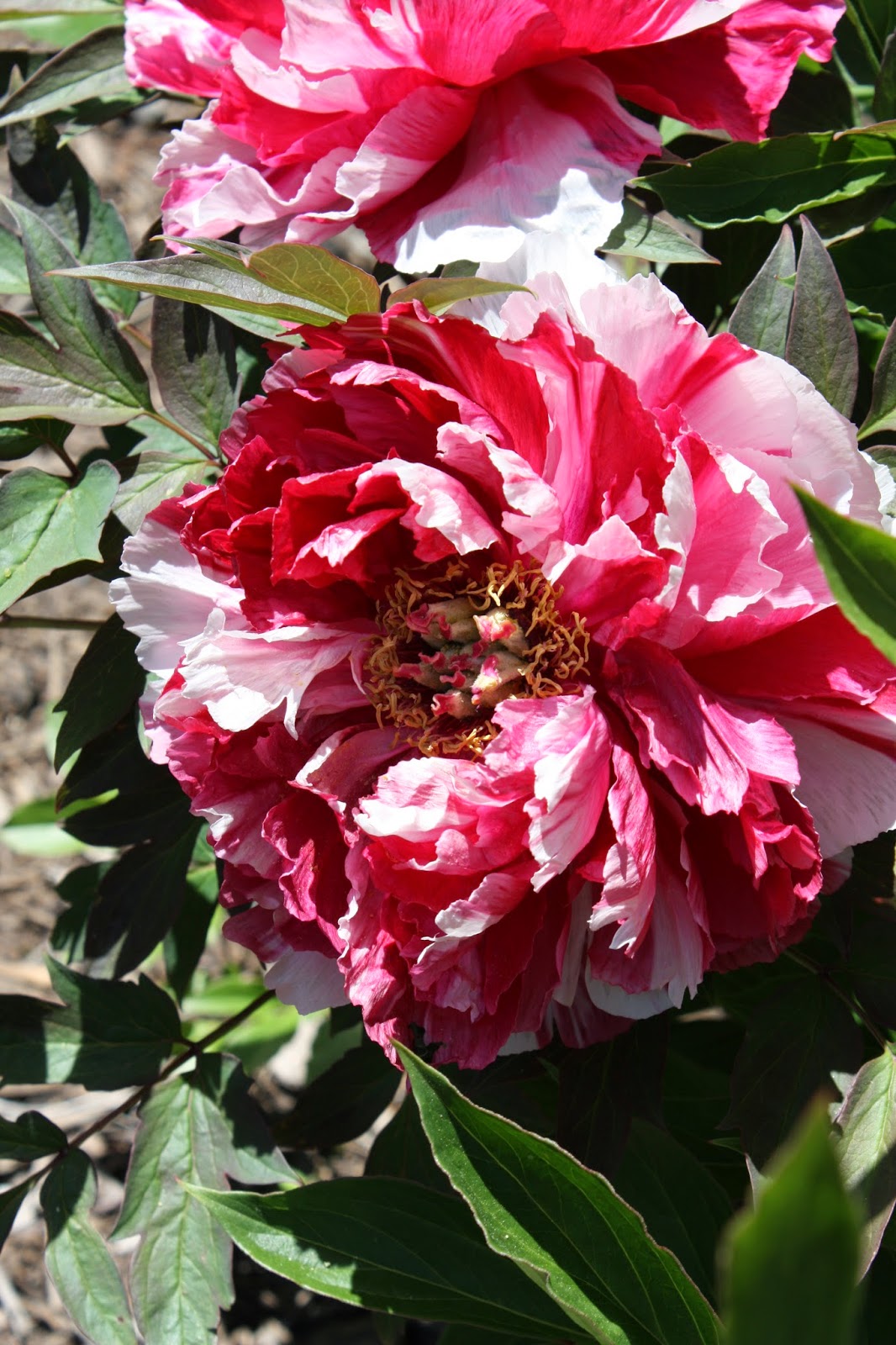 These were all from the greenhouse.  So beautiful.

I blogged a lot more before Facebook. I really need to get that monkey off my back.

I don't think there is a single movie she was in that I didn't love: those great comedies with Rock Hudson (her dear friend) and James Garner, "The Man Who Knew Too Much" with Jimmy Stewart, "Midnight Lace" with Rex Harrison, "Love Me or Leave Me" with James Cagney. She could do anything.

Then there is her music, that sweet beautiful face, and her love of animals.

I always wondered why she was not chosen for the lead in the move version of "South Pacific". Not that Mitzi Gaynor wasn't fantastic but the part just screamed DORIS DAY.

Happy Birthday, Doris Day. You are a priceless treasure, a class act, true caring soul. So glad you shared your gifts with us.
Posted by Deborah M. at 3:21 AM No comments:

Hexagons seem to be all the rage these days. My aunts made a number of flower garden quilts, all by hand, no paper piecing. They cut the hexagons out individually using templates and stitched them together.  The one that I have is packed away somewhere but below is a picture of a variation of that hexagon, much like the one   at the Soupcon Quilt Along where some really beautiful work is being done. I'm very tempted to get into that.

Here is the quilt done by my aunts nearly 40 years ago: 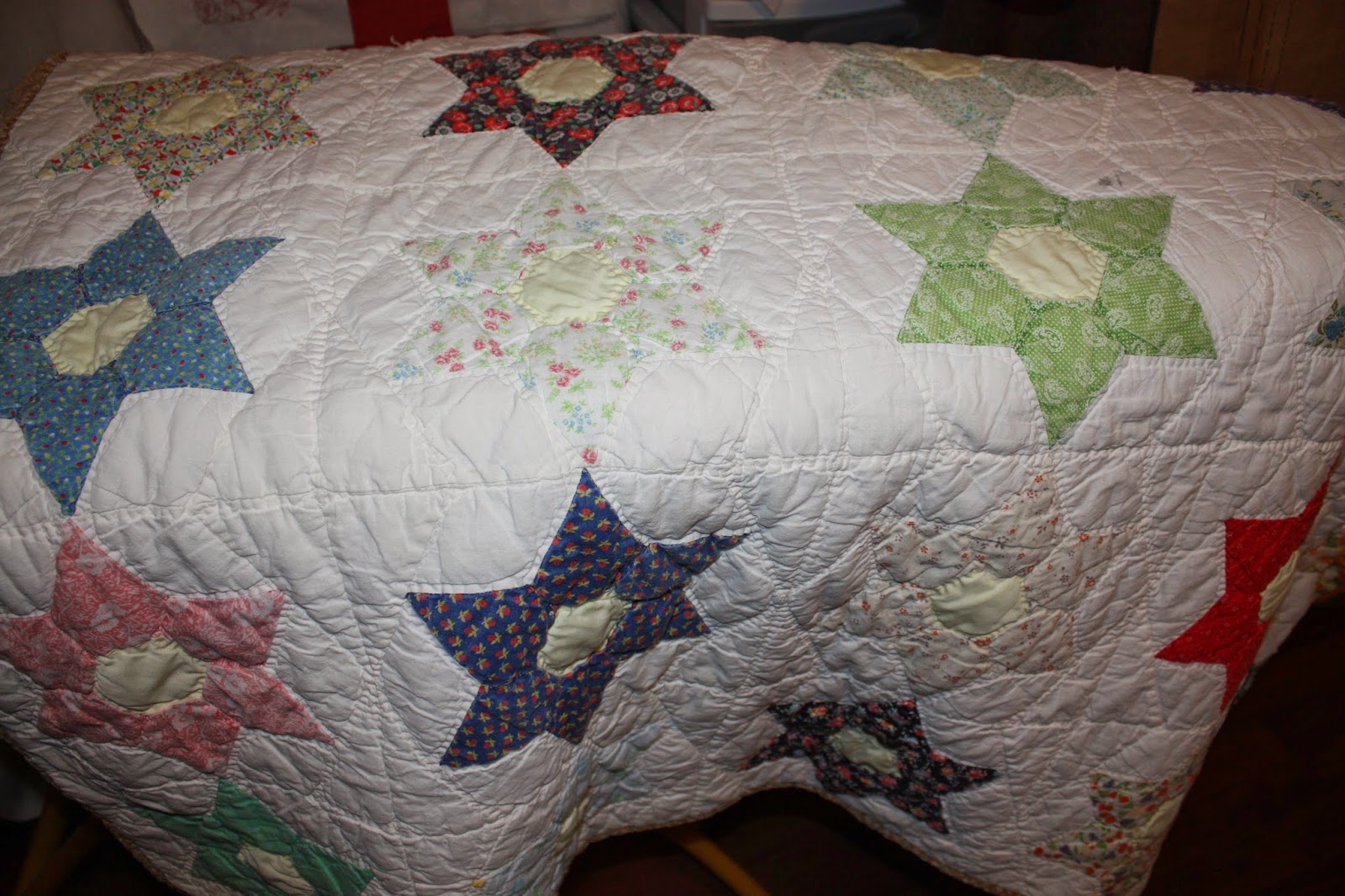 It's very scrappy and at this point, very worn - I need to repair it.

My husband saw this and said, "You should make one of those for Avi."

Avi was our tour guide when we were in Israel last year.

I might do that, and hope that it's finished when I go back to Israel in 4 or 5 years when I retire.

Quilting, sewing, and a little crafting/DIY